A ThunderBolt Zapped near our Home. The Power Shut down, The Earth Leakage Circuit Breaker ELCB tripped. The Problem was a Mains Strip Board, It was the Puncture and Short of Y-Caps.

The caps that were used are very good caps 630V DC rated, but not approved Y-Caps. And five other similar boards have survived, The Board that was zapped is 12 Years Old. It was the same board that had given some problem in the Kitchen a year back.

The cap who Broke Down saved other equipments, saved my day. The lightning bolt was so loud, it woke me up, in sound sleep. I am sure even a Good Y-Cap would have failed, The Bolt from the Blue was a Big one.

This reminds me of a friend of mine who used to Troubleshoot equipment by Sniffing. I saw him sniff out with his nose, Shorted Tantalum Caps in A Genrad Danbridge. Genrad means General Radio, And the LCR bridge was Huge made of discretes and Simple ICs.

One thing leads to another, the Celestial Spark has ignited old Memories. The Chain Reaction Reminds me of another being who could identify Metals by Tasting-Sniffing. He would detect Platinum and Gold, wires and Plating in Old Valves and Antique Telecom Equipment. 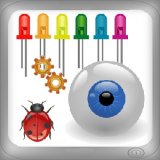